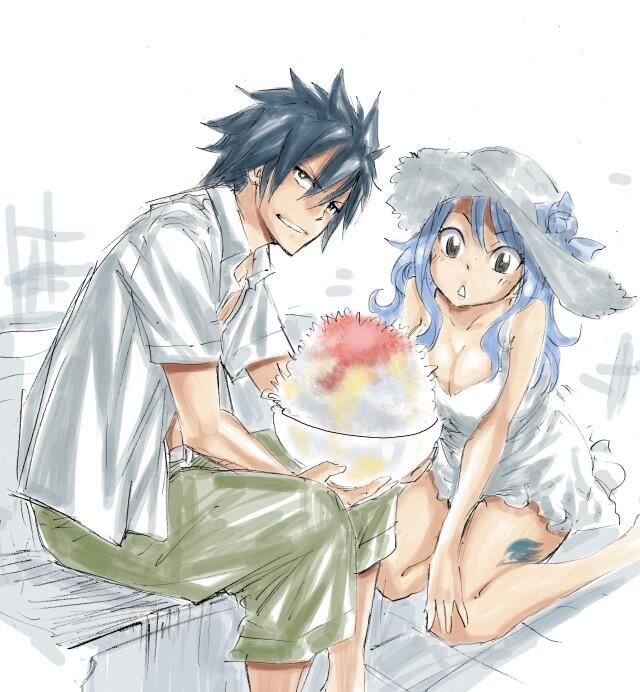 I decided to leave the fandom stuff, color spreads/pages, and chapter covers in the second post as is.  So for the fun stuff on here, I’ll just talk about Hiro Mashima’s twitter.

Hiro Mashima frequently posts drawings and pictures on his twitter account.  He normally draws single characters, however he has drawn Gray and Juvia together alone six times.  Drawings: One, Two, Three, Four, Five (colored), Five (uncolored), Six.  He has also drawn Juvia picking Gray's clothes up as he strips, Juvia with a Gray keychain attached to her umbrella, and Gray pulling Juvia close to him, away from Natsu's harem.  There is also implied Gruvia in his 2013 Christmas comic, as we see Juvia looking at Santa Gray with hearts in her eyes. The amount of drawings Gruvia centric or implied exceed all other pairings he draws on twitter.  In fact, the fifth drawings with the colored and uncolored versions were actually drawn on Gruvia Day (グレジュビ – Gurejubi) in Japan (September 10th 2013).  Therefore, Mashima most likely decided to acknowledge the pairing and fans.

Along with the drawings, a fan asked Mashima how he sees Gray and Juvia, to which he replied as follows:

Translations vary, but I’ve seen multiple and the main translation is this:

A few translators said the last line (about Mashima not being sure what will happen in their future) is actually in a teasing tone.  So basically, it can be taken as him hinting something big will happen between Gray and Juvia in the future.  That does make sense if you compare that to the second line, where he says he likes their current one way relationship.  Hint: current.  That can change.  We don’t know what will happen, but one thing is for sure, and that’s Mashima’s pairing preference.  He likes Gruvia.  Mashima has also retweeted Gruvia cupcakes, and Gruvia dolls made by fans.  Both pictures have romantic implications.  He even comments that the dolls are "too cute!" （「これは可愛いすぎる！」）

On June 5th 2015, Hiro Mashima posted a Gruvia drawing that received 17,000 favorites on twitter, and Mai Nakahara's (Juvia's voice actress) approval. She tweeted him her enthusiasm (「こ…これはっ！！！！」"Th...this is!!!!"), and he responded with 「謎の絡み方です(；д；)」"Their relationship is a mystery". (x)
Subscribe